I agree
I disagree
Read more

One of the greatest warrior kings and builders in Egypt’s history, Ramses II, was known as Ramses the Great. He possessed a great ego and declared himself the equal of the gods. He added a statue of himself boldly sitting among the gods.

Ramses was the only surviving son and heir to Seti I, and he was raised to accomplish great things. When Ramses was in his teens, he proclaimed his successor to the throne and was presented with his palace and harem. Little is known about his beautiful wife, Nefertari, except that she was his “Great Wife,” and that he was devoted to her. When he built a temple for her at Abu Simbel, Ramses inscribed over the door the epithet “she for whom the very sun doth shine.”

Throughout his long life (he lived to be about 86 and fathered more than 100 children), Ramses distinguished himself with military expeditions and building programs. His name can be found in almost every major temple, for what he did not build or remodel, he usurped by inscribing his name on other kings’ monuments. Soon after he was crowned pharaoh, he chose a new site in the Delta for his capital city. Traditionally Egypt had two capitals—the administrative center in Memphis and the religious center in Thebes—but Ramses preferred to live in the Delta, north of Memphis. It is here that he built his “store city,” Pr-Ramses, which is mentioned in the Bible. He called his city “Domain of Ramses, Great of Victories.” It was the ideal location from which to launch military expeditions into Syria and Libya, and some scholars believe Ramses the Great was the pharaoh mentioned in the biblical book of Exodus. 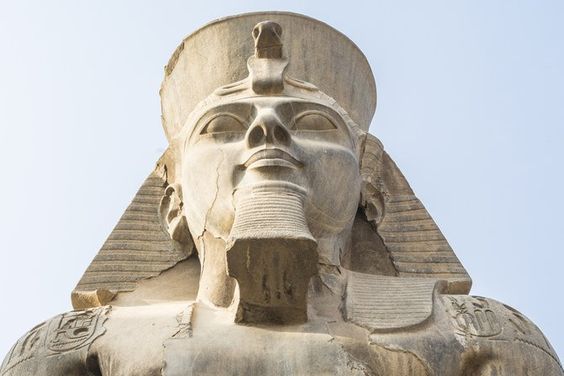 The biblical story of the exodus of the Hebrews from Egypt is one of the greatest archaeological mysteries of our time. There is no mention of the exodus in ancient Egyptian records, and the Bible is the only written account of the event that exists today. It is found in the Pentateuch, the first five books of the Old Testament, which tradition attributes to Moses; the second book of Moses is the account of the Israelites’ departure from Egypt.
The earliest connection between Israel and Egypt is the story of Joseph. According to the Bible, Joseph’s jealous brothers sold Joseph into slavery. Taken to Egypt, his talent for interpreting dreams brought him great success, and eventually, he became vizier of Egypt, a position equal to that of prime minister. Through his ability to interpret prophetic dreams, Joseph was able to save Egypt from starvation during seven years of famine, gaining the eternal gratitude of the pharaoh. Centuries later, when a new pharaoh came to power, he feared an uprising from the growing number of Israelites in Egypt and called for the death of their newborn male children.

There came to power in Egypt a new king who knew nothing of Joseph. “Look,” he said to his subjects, “these people, the sons of Israel, have become so numerous and strong that they are a threat to us. We must be prudent and take steps against their increasing any further, or if war should break out, they might add to the number of our enemies. They might take arms against us and so escape out of the country.” (Exodus 1:8–11).

According to the biblical account, when the pharaoh’s daughter found an Israelite baby in the reeds on the banks of the Nile, she took the baby and named him Moses, which means “born” or “born of” in ancient Egyptian. It was a common name, often linked with another, such as Ramses, which is Ra-messes: “Ra is born.” When Moses was grown, God appeared to him and commanded him to lead the Israelites out of Egypt. However, the pharaoh refused to release them, because by then they were building huge storehouses in his cities in the Delta. The Bible tells us that the Lord was angry and sent 10 plagues to Egypt. The first nine (blood, frogs, gnats, flies, death to the livestock, boils, hail, locusts, and windstorms) can be attributed to natural causes that sometimes occurred in Egypt. The 10th plague killed the firstborn son (and male animal) in every house. When the pharaoh’s firstborn son was struck by this plague and died, the pharaoh agreed to let the Israelites leave Egypt. Some scholars estimate that the firstborn son of Ramses the Great (Amun-Her-Khepshef) died around the postulated date of the exodus.

The name of the pharaoh of the exodus is never mentioned in the Bible. The best clue to his identity is in the cities the Israelites were forced to build.
Accordingly, they put slave drivers over the Israelites to wear them down under heavy loads. In this way, they built the store-cities of Pithom and Rameses for Pharaoh  . . . The  Egyptians  forced the sons of Israel into slavery and made their lives unbearable with hard labor . . . (Exodus 1:11–14)

The town name Ramses is the primary reason Ramses the Great has been identified as the pharaoh of the exodus.

A Private Sailboat to Aswa...

Abu Simbel Day Trip from A...

Abu Simbel Day Tour from A...

Since 2001, Your Egypt Tours has been Egypt's foremost luxury travel company, combining comfort and authenticity in Egypt's greatest destinations. We offer Egypt tours packages, short Egypt tours, Egypt shore excursions and many others services cater to travelers looking for high quality and efficient services with a personal touch and care.

© Your egypt tours 2018- All rights reserved